I believe in cryptozoology and the mysteries of evolution.

I don´t care if Science firmly believes many animals to be completely extinct, and others as simply the product of fertile imagination.

In fact, there is one story that made me suspend judgment, most of all because it, as bizarre and unbelievable as it may seem, was shared to me from a very trusted person.

It was weird because there outside, on the street, were many people gathered.

Obviously she got curious, so she got closer. What she saw was something she didn’t expect at all.

On plain street there was this strange animal she had never seen or heard about before.

It seemed as if it had gotten out from the drain. And apparently it was dead.

She still hadn’t recovered from the sight when she got another surprise.

She clearly saw how the military suddenly arrived and closed the area as fast as they could.

She was astonished by the fastness with which the military tried to get rid of the strange animal and the situation.

The unknown animal had just been ejected from the drain and the military were already acting upon it!

But something that called her attention much more was that she never heard of the strange being and situation on the news.

It was as if the Mexican government had tried to keep the experience HIDDEN from the public.

But that’s not the only reason I have come to believe in cryptozoology. 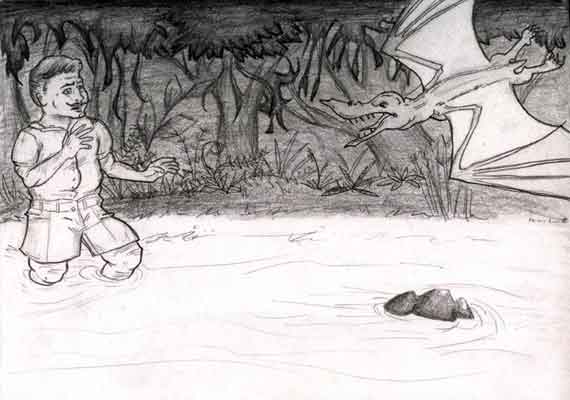 Kongamato, "the Granddaddy of all bats" according to Mr. Sanderson, had just attacked him. Depiction by Chelsea Sams.

According to him, he saw the need to…

"give a name to the totally new discipline in zoology my research implied. That is how I coined the word 'cryptozoology,' the science of hidden animals."

As you can see, these two men CONSIDERED SERIOUSLY the possibility of "extinct" creatures still surviving in remote corners of the world.

Are there large, unknown creatures that survive today in the deep seas, in some unknown lakes, remote forests or inaccessible jungles?

All the animals mentioned before have a verdict: YES.

If the species just shown can survive that long without being detected by man, why not the loch ness monster?


Or any other kind of sea monsters?

And let's fathom the darkest corners of evolution.


Return from Cryptozoology to Paranormal-explore